Currently, we have a collective 20+ years in social media advertising and marketing. We’ve worked organically before the ad platforms existed on Facebook and Twitter. It was crazy the techniques back then and we could organic audiences of 50K real followers within months.

Times have changed, albeit probably for the better in most marketing scenarios, and now its a pay to play game in all of the social media platforms.

Out of all of them, Twitter has been our least favorite and let me explain.

Over the years in working with clients who have both fledgling and large followings (with solid engagement), we have failed to see a return on investment in advertising dollars. If multiple niches were to be presented with compelling case studies, we might be more interested. Twitter does present the following case studies: https://business.twitter.com/en/success-stories.html and in the Americas, they have boosted some sales and met “cost-per-acquisition goals.”

That is pretty wimpy results in our book.

In contrast, Instagram and Snapchat are having significant success, and Instagram with nearly double and user base of Twitter. Snapchat totes case studies that show conversions at 70% less than projected cost-per-acquisition goals.

When we’ve run experiments with Twitter’s advertising platform, we’ve found the targeting to be lacking in the fine-tuning compared to Facebook and even Snapchat. The data connections are not robust either and as said before, our return on investment when compared to other social media platforms has been lackluster.

The other issue we run into is the idea that Twitter is willing to ban normal accounts and ad accounts at will. A recent example is Infowars, which regardless of your political standing, a Twitter ban without recourse is within their right as a private company but not something we want to risk with our clients. We have worked with clients who were non-political and have had banned accounts and we have even had our own ad accounts banned with no recourse.

After reaching out to Twitter Support, we really found out how unprofessional and unhelpful the system is. In the marked example below, we hadn’t even run any ads yet and had full access to the platform. We uploaded a stock photo of paperwork as we were beginning to build our ads, and then within an hour we no longer had access to the Twitter Ad Platform. 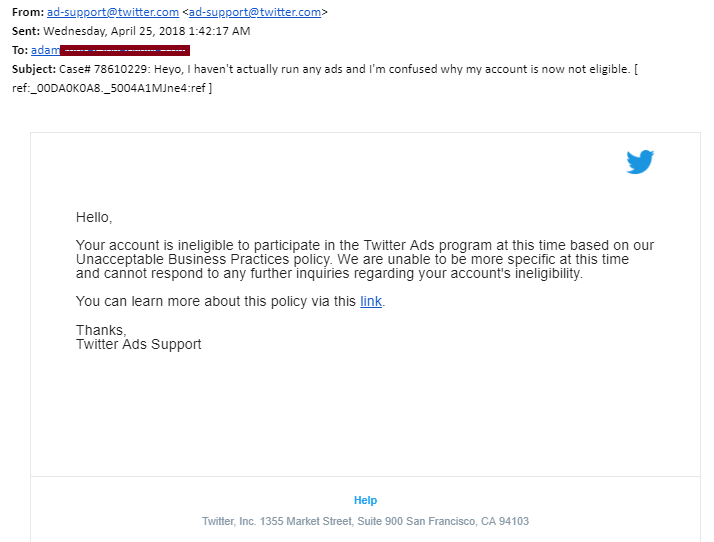 When we’re working with a small business and their livelihood, it would be improper for us to recommend investing in Twitter when that platform can toss our client’s account away.

That is why we are promoting a diversified advertising strategy more than ever.

Twitter has made other moral, ethical feelings and technical failings that we won’t mention today. Many do not believe that shadow-banning occurs within Twitter and Facebook, however Federal lawsuits and even our own experience has shown otherwise.

We stay on the edge advertising, and admittedly Twitter is not there.

We believe in good service and excellence. We also believe in serving our local communities too. We desire to provide tailored solutions to businesses in Pullman, Moscow, Lewiston, Clarkston and the surrounding areas.

Building a solid online presence for your business can help prospective customers find your business and encourage locals to purchase more often!